One Hot Meal is our way of reaching out to the community and has been operating since 2008 out of our St. Stanislaus Cathedral Youth Center.

If you desire a warm meal and fellowship, our doors are open to you.

Anyone is welcome to come and lend a hand. The event typically runs from 11am – 3pm with serving from 1pm -3pm.  There is no prior experience necessary to assist at a One Hot Meal.  We seek anyone who can lend a hand in the hall, kitchen, and delivering.

If you are interested in helping out, please contact Carol Nasser at 570 840 5502 to indicate your willingness to help out this way.

Donations to One Hot Meal

Donations to fund the OHM program have come from individuals and parish organizations.  Many people “sponsor” a One Hot Meal in remembrance of a special event. It is also a great way to get family members or friends to work together and give back.

History of One Hot Meal 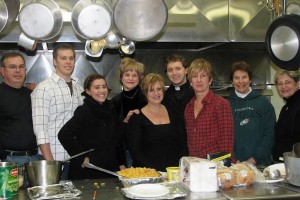 One Hot Meal started as an idea of Fr. Jason Soltysiak to fill a glaring need in the community. At his home parish in Westfield, MA, they did free community meals on a regular basis in their hall and no-ticed a lack of this type of outreach in the Scranton area. One Hot Meal was started on January 1st, 2008 at Stanislaus Cathedral in Scranton. New Year’s Day was picked because many people struggle with a range of emotions and insecurities, so what better day to give someone a place to come and be with others. Originally, the outreach message was that it was for anyone “in need of a hot meal”…but it was quickly decided to change that to be anyone “in need”, and that “need” could be anything from a hot meal, to companionship, to a warm place to sit for an hour or two. In the beginning outreach was made to shelters and soup kitchens in the city to let people know about the event.

The menu for the first year was soup and sandwiches as there was no idea how many people would come. An appeal was made via the church bulletin asking for pots of soup, paper supplies, monetary donations, etc. The reply to that appeal was amazing! The first meal ended up with several pots of soup, trays of sandwiches, and several cakes to serve as dessert. It was a wonderful experience! There have been many volunteers to help in the prep work and serving during One Hot Meal, and the list continues to grow as more people become aware of the program.

The St. Stanislaus Elementary school has funded and prepared the meal several times with the kids doing the work. The YMS of R has done the same and donated a supply cabinet to be used for the OHM supplies. Many volunteers also come from outside our parish…even outside the PNCC. It is truly a community outreach program on so many levels. Although the first few months, the numbers served were small, it grew little by little, and then eventually meals were even sent to the Scranton Intervention Center. Take-outs were always provided to anyone who wanted them. No questions asked! Today, over 300 meals are served the first Saturday of every month. When the Luzerne County community was flooded a few years ago, the Cathedral set up another One Hot Meal at Holy Mother of Sorrow’s Parish in Dupont, PA, to help those that were affected. Same methodology was used in regards to food prep, donations, etc., and there was a lot of help from our friends in the Dupont parish. It was somewhat of a “One Hot Meal” goes on the road.