The organ at Saint Stanislaus Cathedral 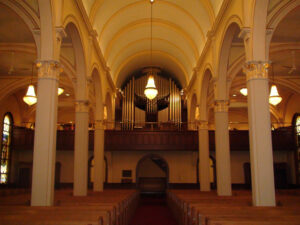 The organ at St. Stanislaus Cathedral was inspired by a movement in France that occurred around the turn of the 20th Century. Between 1850 and 1910, organ music had begun to fall out of favor with the general public. No one was writing music for this instrument and all the great composers such as Bach and Handel had passed away. On top of this, churches were no longer purchasing new organs.

A new idea came about to change the sound of the organ’s traditional timbre, or the quality of sound that distinguishes one musical instrument from another, to imitate that of an orchestra.  It was also suggested to include more voices such as strings, concert flutes, trumpets, clarinets, tubas, French and English horns, all of which were voiced to sound more like a live playing instrument.  The addition of strings was one of the most successful contributions made to organ building.  These additions, which included violins, cellos, violas and even double basses, enhanced the warmth and sound of the instrument. 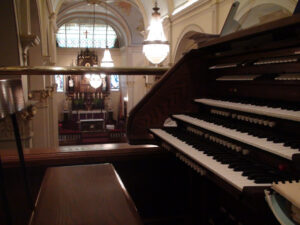 This new type of organ, known as a “Symphonic Organ” inspired new music in the form of orchestral transcriptions, that is troves of famous orchestra and opera works rewritten as organ solos, many of which were famously done by Edwin Lemare. Another development was the birth of the organ symphonies, which, as the name suggests, were entire symphonies written for organ solo. Some of the most famous of these were from the great French organists Widor, Vierne, Franck and Saint-Saens. 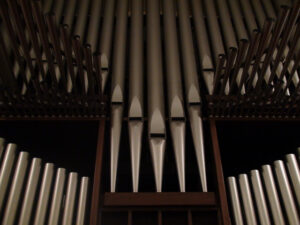 Meanwhile, Austin Organs, Inc., a struggling organ manufacturer founded in 1893 in Hartford, Connecticut, heard of the new, successful organ concept. They travelled to France and brought this concept back to America with their own spin on it.. Subsequently, Austin became one of the most successful organ manufacturers in the world.-of all the many large firms that saw great fame during the golden age of American organ building (c.1890-1938), Austin is the only to survive to the present day.  Our present Austin organ, which consists of 3 manual, has 41 ranks, 45 stops and 2,327 pipes, is a direct descendant of the creativity that developed in France at the turn of the 20th Century.  That organ sound lives on to this day.

Austin Organs, Inc., well established and in its second century of pipe organ manufacturing, continues to innovate, inspire and create instruments that endure the test of time.  Quoting a byline from their Centennial Celebration, we remain; “Proud of Our Past and Focused on the Future”.